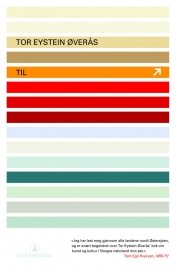 Tor Eystein Øverås has made a journey around the Baltic Sea, through all nine countries that border the sea. The author follows literary traces in the landscape, and traces of film and art. He visits places writers lived, places that are settings for literary works, and reflects on literature and landscape, literature and its sense of time and place, literature as collective memory, and the relationship between literature and nationality. So much concerning literature is based on the concept of a national literature. Øverås wanted to cross borders in the Baltic region, and look for literary connections that transgresses national borders. He aims to connect the national literatures around the Baltic Sea, make them into a whole, a new literature.This book was first published in 2005 by Gyldendal with the title TIL. The new edition in 2017 called BALTIC. A LITERARY JOURNEY is a radically shortened text.

This idea, to make a circle around the Baltic sea, was so obvious to me, almost self-evident. After two years in the writing, I ended up with a book that is not a novel, not a travelogue, not an essay or a memoir, and not a history book or a cultural history book. In bits and parts, it might be all of this.