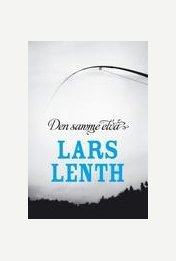 A fly-fisher-novel — that would perhaps be the most precise label to put on Lars Lenth’s beautiful literary debut from 2007. «The same river» tells the story of a young man who runs off from his girl friend, his student life to go fishing in a river called Skrukkedalsrenna in Skrapdalen. His friend Biff has told him a secret. This river is possibly the best for trout fishing in the whole country. The young man is obsessed with the thought of the river, and decides to spend a whole season – from May till October – all by himself and to try to unveil the twists and codes of the mystic river.

A slow novel, many would think, but the narrator’s many subtle confessions and new insights during the months by the river, tells of a deeper understanding of himself and his surroundings, and makes this both an amusing and challenging story to read.